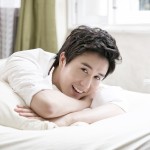 With the youthful charm and natural born talent in Trot, Mr. Shin Yu has contributed to the revival of Trot music, a genre of Korean pop music. Achieving idol status and often called the prince of Trot genre, Mr. Shin Yu is son of Mr. Shin Woong who has been often referred to as one of the 4 Kings of Trot genre.

Plagued by injuries and slumps, Mr. Shin Yu’s childhood dream of becoming a professional Soccer player could not be realized.

When faced with having to abandon the childhood dreams, he has spent countless hours finding sanctuary in music. By chance, Mr. Shin Yu was offered to perform at SBC Net Music Festival where he won the Top Award. As a result of the music festival, Mr. Shin Yu was chosen to record and release his very first album under ballad genre.

Prior to scheduled album recording, Mr. Shin Yu experienced yet another stumbling block, changing of the voice. To make the matters worse, the agency that had committed to Mr. Shin Yu’s album filed bankruptcy. Mr. Shin Yu’s sweat, effort and countless hours of preparation were all in vain.

As his interest in Trot music genre peaked, Mr. Shin Yu released his debut album and song ‘Sleeping Princess’ in 2008. With a dedicated loyal audience, his subsequent song title ‘Second Hand’ became an instant hit even without any publicity.

With steady outpour of support and love from ever increasing fan base, Mr. Shin Yu’s album volume 2 containing ‘kkochmul’ <꽃물> (flower tears) reached top of the chart in the various music charts, his songs were being played almost everywhere – highway rest stops, supermarkets, restaurants, etc. Original sound track sold over 5 million copies. In total, over 10 million copies of the song has been sold, downloaded, and streamed.

With much outpouring of love and support from the fans, Mr. Shin Yu’s nationwide solo concert tours have continued to be sold out. There is an explosive response by the fans for the concert tickets in South Korea as well as in Japan.

Mr. Shin Yu’s concerts are unlike the traditional Trot genre. He is an entertainer in the truest sense integrating genre such as ballads, POP, dance, theater, etc. in his concerts performances.

No less than the venues for any Korean idol, Mr. Shin Yu’s venues are filled with energy that permeates fans of all ages. Mr. Shin Yu strives to represent Korean Trot genre to not only to Japan, China, but to the world.

As his name Shin Yu (신유) in Korean means to heal, Mr. Shin Yu strives to heal the human heart with songs. To become a singer healing the hearts of many, he has dedicated himself to the concerts to be close to his fans.

He aspires to become the ambassador of traditional Trot genre for the Republic of Korea!